My Mates' Jokes Bring All The Folks To The Yard #2 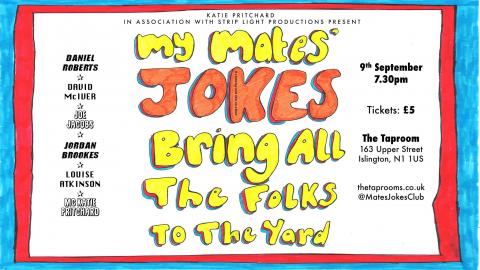 Join musical maniac Katie Pritchard and a whole heap of her favourite comedy pals for a night of entertainment. With a one-person house band (Me, on my own, like the coolest person you know amiright?!), games, drinks, fun, and all the laughter you can handle with the snazziest of line-ups imaginable!!

On the bill this month we have (pan pipes fanfare)…

Comedian, actor and improviser, Daniel Nils Roberts is a member of Chortle Award-winning sensations Austentatious, with whom he has performed in major theatres all across the UK – including an upcoming West End Run at the Piccadilly Theatre. He appeared with the group in a recent BBC Radio 4 comedy special.

Daniel is also a celebrated scripted character comedian. 'As strong as debuts come', Fest said of his first solo Edinburgh Fringe hour Honey, which enjoyed an acclaimed run at The Pleasance in 2016, after a ‘Best Comedy’ award-nominated run at Perth Fringe World. Kate Copstick had branded Daniel's debut half-hour Asp, 'Sheer genius… one to watch most definitely' in The Scotsman the previous year.
He returned in 2017 with his sophomore solo Edinburgh Fringe show The Causeway, which gained Daniel his second successive nomination for 'Best Comedy' when it premiered at Fringe World earlier in the year.

Critically acclaimed and adored by his peers, Jordan is riding high. There’s been so much buzz about him. I’ve heard he does absurd stuff on stage? Yeah sort of, but it’s also very accessible. Apparently, he’s a really nice guy in real life too. Yeah he is. Very charming. Yes, very charming. Got a lot of time for him. Shall we give him a go then? Oh, absolutely not.

An act unlike any other, he is the current master of absurd comedy, but with a big heart, a vulnerable brain and searing, hilarious honesty.

"Wildly entertaining stand-up that demolishes the conventions of comedy." The Guardian

“Caustically funny and surprising… you’re advised to see Brookes fast before word of mouth fills every seat.” ★★★★ The Scotsman
“Highly inventive, a compelling performer, who doesn’t sacrifice laughs for the sake of artistic stretch.” ★★★★ Chortle

David McIver is a comedian, writer and actor.
He’s been selected for the BBC New Comedy Award (2017 & 2018), heard on BBC Radio 1, BBC Radio 4 Extra and seen on BBC Three.
‘Had his audience in fits of laughter…’ ★★★★★ LondonTheatre1
‘Uniquely inventive in its approach to comedy, getting you to laugh in ways you probably didn’t think you could.’ ★★★★½ Short Com
‘A very personal, touching, nice little show – with a big poignant message to take away.’ ★★★★ FringeGuru
‘David McIver is a refreshing breath of air in every sense.’ ★★★★ Broadway Baby
‘Charming and playful… this act could grow into something delightfully ridiculous’ – Steve Bennett, Chortle.

Louise Atkinson is a comedian, writer and drunken robotics enthusiast. Originally from the cultural delights of Hull, she now lives in London and spends most of her days uttering the words ‘How much!?!’ in most London establishments. She started comedy in 2017 and is already making her mark on the open mic scene, and is at the Edinburgh Fringe in 2018 sharing a stage in their own show, with another finalist in Amused Moose National New Comic award.

Joe Jacobs is a London based comedian, rapper and writer. Since 2012, he has performed nationally and internationally, sharing bills with acts including Bill Burr, Stewart Lee and Mr. Motivator.

His live shows effortlessly flit between hip hop and comedy and he’s been seen/heard on Channel 4, BBC Radio 4, BBC 6 Music, Radio 1XTRA, plus gained millions of viral video views online. In addition to stand up, as solo artist Jester Jacobs, he’s released regular music since his debut Mental Disorder in 2008.

In 2017, Joe took Ripe to the Edinburgh Fringe where it received critical acclaim.

‘Stalks his comedy like a panther at night’ ★★★★ (Mumble Comedy)

Plus a sneaky special guest!!

So, what are you waiting for? Nab a ticket before they all disappear, and come and join in the fun times!!!

*Line-up is subject to change.